…Recently re-watched two films back-to-back at home that I first saw many years ago, at a time when cinema was becoming more than just an adolescent obsession or a way to let the long hours of the day pass by, but was opening up my eyes in a new way to the world around me: Wim Wenders’ Wings of Desire (1987) and 35 Shots of Rum (2008) by Claire Denis. Two films that are colored in my memory by the heavy aura of winter; the shots of Berlin and Paris in the closing light of day as seen fleetingly from the front windows of moving S-Bahn trains; the leafless trees along the Spree against an eternal gray sky; the railway lines glinting tenderly in the winter sun on the Parisian outskirts; and at the center of each film the calm, quiet presence of Bruno Ganz and Alex Descas, each of whose smile radiates a warmth you wish you could lie down and sleep in …

…It was long past midnight as the end credits of the Denis film appeared on the television screen and outside it was snowing, countless tiny flakes wafting through the air in the early morning dark; leaning my head out the window I let the snow fall on my lips and nose, gentle touches of cold on my face, the first snowfall of the year, here in Vienna. The next morning I took this Polaroid… 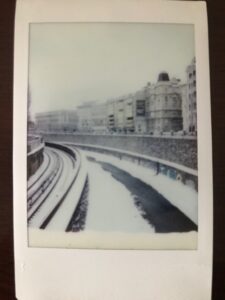 …On my writing desk I have two old black and white photographs I found about four years ago in a second-hand bookstore in the Windmühlgasse in Vienna’s sixth district. (And the same place, incidentally, where I purchased the Highsmith novel this past December.) I remember it was late summer at the time, the August heat stinging face and bare skin, bright quadrangles of sunlight on the floor and shelves of the shop heating up the cotton spines of faded volumes; in a corner encircled by stacks of books the ageing proprietor sat at an electric typewriter in a deep pool of shadow. Each photograph is of a winter scene:

…Here now, a still from Yasujirō Ozu’s silent film Days of Youth (1929). An image like a memory from childhood you carry with you into old age; of such lightness and levity you feel yourself floating…

Several years ago I watched Jonas Mekas’ diary film Lost, Lost, Lost (1976) on 16mm at Anthology Film Archives in downtown Manhattan. It was the end of December; the city was cold and when I stepped out of the theater three hours later onto 2nd Avenue I remember how snow flurried down the street, the first flakes of the year chasing after cars in the wind and disappearing into the lights of nighttime traffic. This image came to mind while reading the first volume of Mekas’ recently published New York diaries, which I am nearly halfway through now. Descriptions of winter weather abound in his entries; reading them I think back to Lost, Lost, Lost, which, like the book, covers his first 20 years in New York after arriving with his brother Adolfas in 1949 as a Displaced Person from post-war Europe. I remember the scenes of snow falling over Central Park, the crowds of people gathered together in beautiful white fields and shots of wintry Williamsburg streets where the brothers spent their first penniless years in the city. Reading Mekas’ diaries has caused these images from the film to resurface; images that have nothing to do with cinema, but with life itself as it is momentarily lived in the present before it is subsumed by the past. And what is a diary – written or visual – among many things if not the fragile attempt to hold still the present moment by trying to shelter it within the protective fold of a medium, a feat as difficult as it is to prevent a snowflake from melting away by cupping it between the palms of your hands.

“November 26, 1959: Snow patches, and scattered leaves, now frozen, stood out in the huge, peaceful vastness stretching to all sides. And as I looked at this landscape, it had such a strong personality that it was impossible not to get lost in it. It overcame me, its cold, wintry purity and truth. A deep peace and serenity came from it and it was purifying, it forced me to abandon all pretense, all officialdom and just be myself – just as this landscape was its bare self…I want to shout, as I used to do in my childhood SNOW SNOW SNOW! – be again with it, be again!“

Invoking the textures, colors and smells of the seasons is a way of returning to the lost landscape of his childhood, back to Semeniškiai, Lithuania where Mekas spent the first 22 years of his life before fleeing the Soviets with Adolfas in 1944. They were subsequently captured by the Germans en route to Vienna and sent to toil away in a forced labor camp for the remainder of the war near Hamburg. And I remember too now watching Reminiscences of a Journey to Lithuania (1972) last January in Vienna; all those single-framed images of birch trees and birds, flowers radiant in the sun, and the green fields that surround his home come to mind as I read:

“ July 20, 1953…we two are attached only to Semeniškiai, to our little village, to the countryside and the people and the objects there. It has nothing to do with nationalism…No rain, no wind, no snowstorm, no April is like that of our childhood, in Semeniškiai, nowhere…Our movements, the way we walk. Our accents, the way we talk. Everything is determined, marked by the climate, landscape, sun in which we grew up, lived.”

Mekas frequently drafts brief verbal sketches of nature, descriptions that are like the calm light-handed brushstrokes of a watercolor painter out in the open country…

“June 16, 1961: I just want to go out, somewhere, and sit under a tree, and look at the blue sky, and do nothing, and see nothing but that blue sky, look at the eternity…”

…or that resemble the expansive minimalism of a haiku poem…

…a string of words that evoke the soothing lightness of a late summer day, the tenderness of being in the world.

The diary is the kind of book you want to take with you on long walks through an unfamiliar city, to carry all of its 813 pages under your arm the same way Mekas lugged his 16mm Bolex on his endless rambles through New York. Stand on a street corner, open to a page at random and read:

“August 18, 1950: For hours I wandered through the city. I dissolved into it, I got drunk on it, I drifted deeper and deeper into it, without any control. I walked from street to street. I stood in crowds, I sat in cafeterias, in pokerinos, amusement parlors, jazz bars. I drank the rhythm of Times Square, I felt I was part of it, part of the Times Square night. Then I took a subway and rode for half an hour. I had nothing to do. I was drinking the night, the emptiness and the loneliness of the city.”

An obsessive preoccupation with the peripatetic and the perambulatory, Mekas’ itinerant writing and cinema is that of the Homeric drifter traveling through a country, a city, a street wherein he casts himself as an exile at home nowhere, as a nobody always on the move, a fate linked to his status as a Displaced Person.

“January 11, 1950: There are moments and places during which I feel that I would like to always remain there. But no: the next moment I am gone…So I keep moving ahead, looking ahead for other moments. Is it my nature or did the war do that to me? The question is: was I born a Displaced Person or did the war make me into one? Displacement, as a way of living and thinking and feeling. Never home. Always on the move.

“No date, 1951: Ah, this goddamn desperation of a DP, that’s what it is, I said to myself. I walked out of the subway and started walking down 50th Street, west. The street must have an end somewhere…I’ll walk until I see its end, that’s something, and this is Friday evening and I have nothing else to do and nobody to see.”

Walking becomes a way of probing unknown territory, a process of transforming a strange place into familiar terrain where new personal memories are inscribed onto the geography of the city:

“Note date, 1951: I was walking today, looking for work. After sitting five hours in the Warren Street employment agency I got lost among the downtown streets. People, streets, shops. Strangely, for the first time in two years of my New York life, here on these streets, I could perceive a touch of memory, of something familiar, here, on this corner of Chambers Street and Broadway I have spent so much time around Warren Street that there is now a little part of myself here, too in these dingy rooms, luncheonettes, bars…This was my New York. I almost felt as if I was home. Like a cat being stroked.”

IV. EVERYTHING IS CINEMA

His walks often lead him to the movies – the cheap playhouses on 42nd Street and the different film clubs around town, such as Cinema 16 founded by Amos Vogel. Ernst Lubitsch, Josef von Sternberg, Orson Welles, Jean Renoir, Roberto Rossellini, Howard Hawks – these are some of the names that continuously reappear like musical refrains in the early years of the diaries, before his turn towards the avant-garde and what eventually became known as the New American Cinema.

“August 8, 1950: …we absorb in Hawks everything equally, everything is important here, no close-ups here, no morality of selected virtues or wisdom: the morality of Hawks’ style (approach) is open, all-embracing…That’s what Hawks’ art does. It doesn’t even look like art. It’s so simple.”

“December 15, 1952: Jean Renoir spoke at Cinema 16. Screening of Le Règle du Jeu. Even after eleven years in America he looks 100% French, in his short grey suit, his continuously gesticulating arms, and his whole body, moving and swinging when he speaks. He speaks freely and in an improvisational manner, a stream of consciousness. He likes to talk, just talk, simply and without fuss.”

Reading these entries makes you want to return to those films you saw years ago when you were first discovering cinema, when it wasn’t yet elevated to an art form, but was a natural part of living, like the music you listened to as a teenager…

…The other day I re-watched Le Grande Illusion (1937) by Renoir at home. Outside it was dark, the middle of December and as the movie was ending somewhere nearby a church bell was striking seven o’clock …The final shot shows Jean Gabin and Marcel Dalio fleeing Germany into neutral Switzerland by crossing a field of untouched snow, its whiteness gleaming forth like an apparition vaguely seen during an afternoon nap, while the two escapees appear as two small figures in the landscape, their backs towards us…